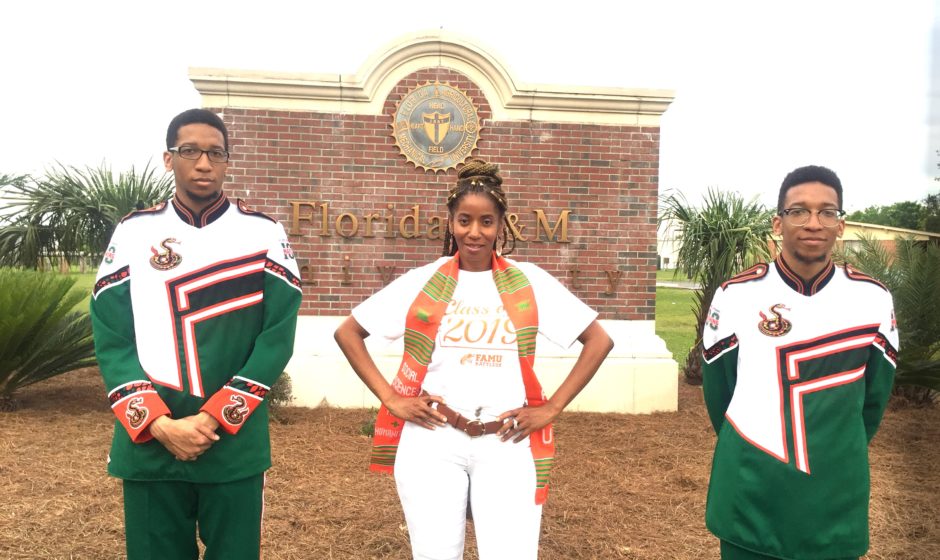 FAMU Mom Madelyn McClarey and twins, Aubrey and Aaron Hough, in May 2019.

After her identical twin sons, Aaron and Aubrey Hough, insisted she follow them to Tallahassee to fulfill her dream of becoming a college graduate, Madelyn McClarey has continued to surpass her early aspirations.

McClarey, who earned her bachelor’s degree in English with a minor in education a year ago, graduated with a master’s in applied social Science/history on Saturday, Aug. 1.

Her professional goals were previously put on hold when she became a single mom caring for three kids. Prior to motherhood, McClarey had graduated from business school in New York.

In summer 2014, Aaron Hough moved into a dorm at FAMU first and was joined in the fall by his twin. They were soon followed by their mom, who first took several classes at Tallahassee Community College (TCC) and earned an associate of arts degree with honors, then transferred her credits to FAMU through the IGNITE program, which guarantees admissions to those who meet certain academic requirements.

Since becoming a Rattler, McClarey has thrived alongside her children, becoming an active member of organizations such as the FAMU English Guild, where she served as president, the National Council of Negro Women, and serving as historian for Phi Delta Kappa, a professional organization for educators.

Aaron and Aubrey, both former members of the Marching “100” who graduated with degrees in music composition and the music industry respectively, are exploring their entrepreneurial opportunities and staying flexible.

“Aubrey has an interest in producing his own sound musically, and Aaron loves the combination of art and music. And I must say, Aaron, is one hell of an artist. The first art class that he took was last semester at FAMU, but I can totally see him having a gallery someday,” said McClarey. “The twins are staying as optimistic as possible. They also have plans to pursue a master’s degree in the arts.”

After a major auto accident, Blake Hough, the oldest son, plans to attend FAMU to pursue a music industry degree.

McClarey was working as a language coach at Sheridan Hills Elementary when she took a one-year leave of absence to move to Tallahassee and get acclimated to her renewed life as a student.

After becoming adjusted to Tallahassee, she continued to find work related to her passion for education and literacy, now with the North Florida Freedom Schools program at FAMU Developmental Research School, which helps bridge the gap for children with reading deficiencies.

She now plans to spend the next year continuing her role teaching as an adjunct English professor at TCC before moving to North Carolina to pursue a doctorate.

“My concentration of Ph.D. studies will be in women’s studies and social justice/inequities,” said McClarey. “Since much of my work experience is tied to social justice and single-gender studies, this type of transition just seems like the perfect fit.”