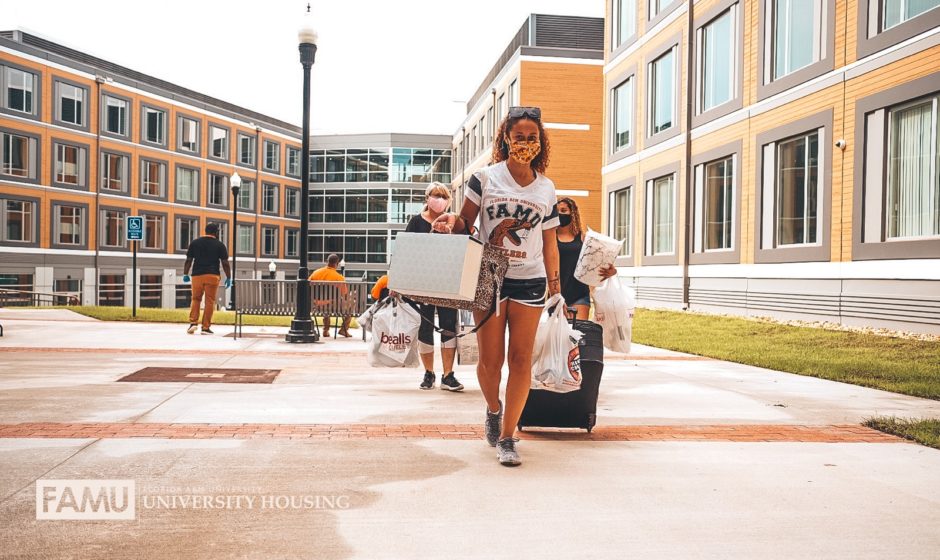 They arrived from all over Florida. They drove from throughout the Southeast. They flew in from California. On Thursday, August 20, students began moving into FAMU Towers, Florida A&M University’s brand-new residence hall.

Akil Webster, a sophomore architecture student from West Palm Beach, drove back to Tallahassee from South Florida with his classmate Justin Grant. He was excited to be back on campus.

“It means a lot. It just doesn’t feel the same being on a computer all day,” Webster said. “It just feels better being in this environment, being able to communicate with friends and teachers. I am very excited.”

McKenzie Reese is a second-year cardio-pulmonary science student from Oakland, California. Reese and her mother Lisa Chilton arrived Thursday morning towing suitcases and ready to move into to her new accommodations.

“I’m really happy to be moving back in campus,” said Reese. “I think it’s good to have some in person classes but also to make sure you handle it to where it’s not too many.”

Reese and Webster are two of the 350 students expected to be occupying FAMU Towers, which includes two identical four-story buildings at 451 and 461 Osceola Street.

The 700-bed facility cost around $56 million and was constructed with funds from a $125 million loan from the U.S. Department of Education designed to assist the nation’s historically Black colleges and universities (HBCU) with construction projects.

During a tour of FAMU Towers, President Larry Robinson, Ph.D., said he was in awe to see the result of all the hard work since the University signed the HBCU capital financing agreement in January 2019.

“One of our major priorities was to address the housing situation on campus. This is probably much more than anyone could have expected. It doesn’t just look great. It has all of those features that any student in 2020 can expect in a housing facility on any campus in America,” said Robinson as he stood in the common area on the third floor of the North Tower. “Just seeing the young people move in, it’s really touching when I think about the battle we had to get this far.”

FAMU Towers North and South are identical. Each include 175 rooms and 350 beds. Because of the COVID-19 pandemic, double rooms each house only one student. Both Towers have a kitchen with eating areas, common areas on each floor, computer rooms, conference room, a laundry room and game rooms.

Moving in days were expanded to accommodate social distancing in the face of the global pandemic. Students were scheduled in two-hour blocks and were limited to be accompanied by two family members. Face masks were required. As students and their parents arrived, Office of Housing staff checked their  temperature before they could enter the buildings. COVID-19 related signage has been posted throughout the residence halls.

“Things went very smoothly,” said Housing Office Director Jennifer Wilder, Ed.D. “The students arrived and we are working with them to keep everyone safe and healthy.”

As of Aug. 27, More than 1,300 students are living in campus residence halls. With fewer students on campus, those originally assigned to live in Truth Hall and the PaddyFote Complex will be moved to other residence halls, Wilder said.