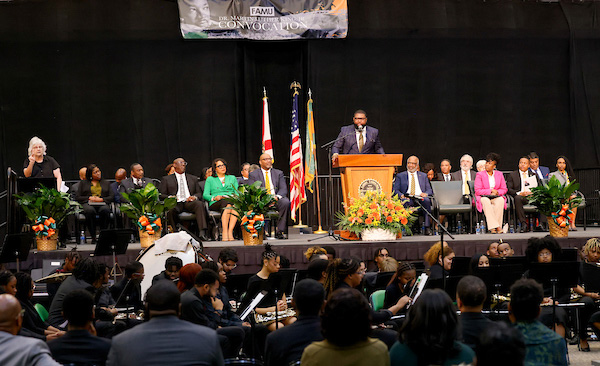 Focusing on the concept of “déjà vu,” Griffin addressed the importance of embracing and understanding the past, present and future.

“Our ancestors had dreams, but we are the generation to see things come to pass.

I’m not saying you won’t dream dreams or have visions because you will, but what I’m saying is that we are on the brink of déjà vu,” Griffin said. “You are on the threshold of seeing things manifest that the last generation was fortunate enough to see in dreams and visions, but you will see the manifestation of it.”

“Déjà vu,” a French phrase that means “I’ve seen this before,” is, Griffin said, “the culmination of really three things happening in sequential order: the dream, the awakening, and remembering.”

“It’s funny because you can be physically awakened, but sometimes you don’t wake up until you remember the dream. This is why the enemy is fighting so hard to get the history of African Americans’ struggle out of school,” Griffin said. “If we remember where we came from, we would wake up,” Griffin said. “If you teach them the history of who we are, then you would have to tell them the truth, like that the old capital building, situated beautifully on North Monroe Street was built on the backs of our ancestors… now you won’t find it in our history books, but it’s what we must remember.”

During the ceremony, FAMU President Larry Robinson, Ph.D., awarded leadership awards to Student Government Association President and Board of Trustee member Zachary C. Bell and Marching “100” Director Shelby Chipman, Ph.D. Bell, a Jacksonville native, is a graduating senior. Chipman, a FAMU alum, was lauded for leading the band through a dizzying run of eye-catching performances, including a triumphant return to Paris, France, for the Louis Vuitton men’s fashion show in 2022.

Griffin also used his address to recall his student days when he was a member of the Marching “100” Band and met Michelle, the woman who would become his wife and mother of their five children.

Griffin has led Family Worship and Praise Center (FWPC) in Tallahassee since 2013 and is a gifted saxophonist, former Marching “100” Band member, playwright, songwriter, and entrepreneur. Griffin owns and operates a residential and commercial painting business, Paintworks, and Griffin Enterprises, under which he has used his talents to produce, his stage play, “Me Against the World,” which has been well received.

The Charleston, South Carolina native is a former band director at Rickards High School. Since succeeding Cyrus Flanagan as pastor of FWPC, Griffin has sought to expand the congregation’s ministry beyond the church’s four walls. In 2017, under his leadership, FWPC launched Shoes4School, which has distributed more than 14,000 pairs of shoes to students in Tallahassee and the surrounding areas. FWPC also started hosting drive-by fish fries offering free dinner to area residents.

Griffin challenged students at the Lawson Multipurpose Center to understand their heritage as Rattlers.

“Don’t forget who you are. Understand there is a strong correlation between where we are from, and who we are,” said Griffin, who cited the inspiration of great athletes such as LeBron James and Simone Biles as examples to emulate.

“I see the rise of these lions, the rise of kings and queens. When I see LeBron, I know he’s been coached, but you can’t omit his ability to do what most deem impossible. When you look at the work of Simone Biles, the gymnast, you know she’s been trained. But her instincts give her the ability to do what no one else could ever do in female gymnastics. She didn’t come to fit in; she came in to dominate. They tried to change the scoring system to make her lose, but she remained on top,” Griffin said. “Remember who you are, and don’t suppress your instincts. You aren’t here to fit in; you are here to dominate.”